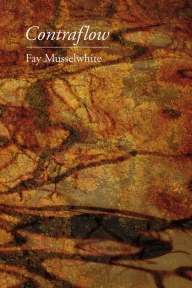 Contraflow is Fay Musselwhite’s debut full-length poetry collection. A beautifully produced 112-page hardback (with cover artwork by Mary Musselwhite), it is available from Longbarrow Press for £12.99. You can order the book securely by clicking on the relevant PayPal button above. Click on the links at the top of this page to read and listen to poems from the book.

When we’re fluent
in the language of rivers and seas
let that be our currency.

The tales that rivers tell have tangled with our own for millennia: before, through, and after the industrial age. Humans’ rapid migration to towns, often along the course of these waterways, has left many of us bewildered and ill-equipped in an environment at odds with the natural world we depend on. Rivers, bringing the relief of nature to the centres of cities they grew, confront us with forces bare-faced and ancient, seemingly unmoved by our regard. Malleable in their youth, prone to messing about before finding their groove, many were harnessed for mill-work as they matured, and then, like us, after centuries of valuable industry, were abandoned, left to lick their wounds.

All these tales converge in the Rivelin, which rises from peat moorland north-west of Sheffield, and descends 80 metres as it approaches the city. This fast-flowing river, and the valley it etched out, is the setting for many of the poems in Fay Musselwhite’s first collection. Contraflow harnesses these energies to carve its own rugged course, with its bottlenecks, bends and counter-currents: tales that slant, swell and spill.

Listen to a new podcast of Fay Musselwhite’s first ‘Contraflow’ poetry walk through the Rivelin Valley, north-west Sheffield, in March 2014:

Here’s a short film of Fay Musselwhite and Karl Hurst leading the third ‘Contraflow’ poetry walk through the Rivelin Valley in October 2016:

Click here to read ‘The Craft Muscle’, in which Fay Musselwhite reflects on the development of her writing practice (and her long poem ‘Memoir of a Working River’).

Contraflow was launched at The Shakespeare, Sheffield, on 26 April 2016, with collaborative readings by Fay Musselwhite, Matthew Clegg and Andrew Hirst. Details of further events will be posted here.

Fay Musselwhite lives in Sheffield. She leads workshops and walks focusing on local and working-class history, often featuring the culture and ecology of the Rivelin Valley. Her work includes collaboration with artists in film, sound and other media. Her poems have appeared in a range of publications, including the Longbarrow Press anthology The Footing (2013).